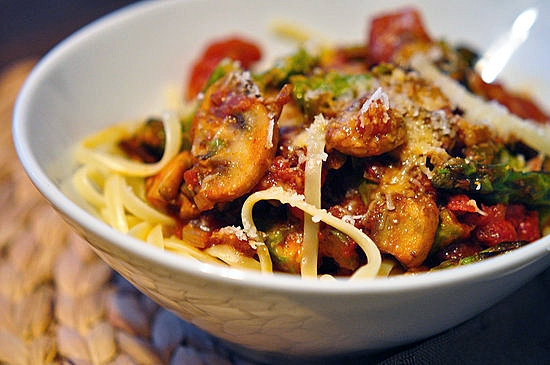 Posted at 14:39h in Landscaping by Toni Callahan

1 – Put the bacon into a fry pan. Fry over low heat, stirring occasionally for 5-7 minutes or until the bacon is browned and the fat has rendered. Spoon off all but 3 tablespoons of fat.

2 – Increase the heat and add the mushrooms and shallots. Cook for 3-5 minutes until the mushrooms have softened and most of the liquid has evaporated.

3 -Add the garlic, chile, oregano, chopped tomatoes, salt and pepper. Bring to a boil, cover and simmer stirring occasionally for about 25-30 minutes until thick and rich. About ten minutes prior to sauce finishing, top with the asparagus and allow to cook. Taste as season with more salt and pepper, if needed.

4 – While the sauce cooks down, fill a large pot with cold water and bring to boil. Add 1 tablespoon salt and cook the spaghetti until it is al dente. Drain in a colander.

5 – In a serving bowl, add pasta and 2 tablespoons of butter and top with sauce and a sprinkling of Parmesan cheese.